There have been requests, I figured since this is my last day of being pregnant I better do it. 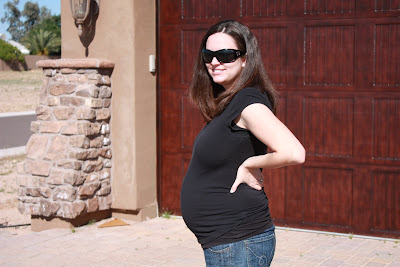 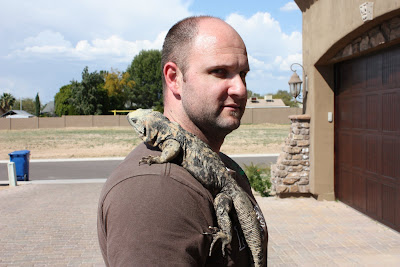 This is Dave's new "baby." It's a San Esteban Chuckwalla in case you couldn't tell. I think he really wanted me to show off the lizard on the blog so I thought I would humor him.

I'm anxiously awaiting my doctors appointment this afternoon. I feel like it can't come fast enough. My due date is exactly one week from today and I am not one of those lucky ladies whose babies like to come early. I must be a good incubator because both Justin and Isabelle only came due to a little prompting from the doctor. I am hoping that today he will say that I have at least started to progress a little bit and then if he is really nice he will say "Let's set up a date to induce you." I love my doctor because I really think he understands how miserable women feel towards the end of their pregnancy and has no problem with inducing them.

Friday, after having blurry vision several times I decided to go to the hospital to be checked out. I showered. I shaved. I was ready. I really thought they would say "We need to induce you. " Unfortunately, everything checked out okay and they sent me home with orders of bed rest. Okay, it's good that everything checked out okay but I'm ready to have this baby already! Luckily, I have a wonderful husband and he let me relax and stay in bed as much as I wanted. It really helped me to feel better.

Well, I guess I will go back to watching the clock. . .

By the way, if anyone can recommend a good nursing bra, I just realized I need one still, so
please let me know!

Update: I'm being induced on Sunday! Now I need to prepare myself for what it will be like to have three kids under the age of three and a half! 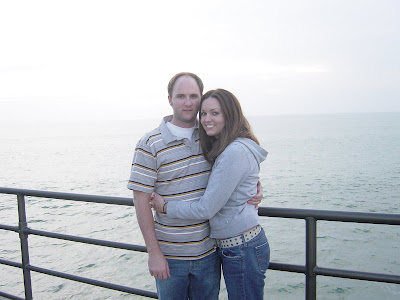 Five years and counting!
Remember when we used to be able to go on vacation whenever we wanted. . .

When it Rains it Pours!

After a miserable night and morning with Isabelle I decided to take her to the doctor today. Turns out she has an ear infection! She is on antibiotics now so hopefully she will be back to normal soon.

But wait there's more. . . I had my doctor's appointment this afternoon and it turns out I have extremely high blood pressure and so this baby might be coming a little earlier than expected! I go back on Monday to get checked again so we will see what happens! The doctor said to me, "You need to try to take it easy." I felt like saying, "Let me tell you about my week and then you tell me again to take it easy!"

That's how the past couple of days have been for me and even more so for Justin. Let me give you the background. Justin has been sick for at least a week and a half with a fever that comes and goes, sometimes getting as high as 104 degrees, and a really nasty cough. I took him to the doctor a week from last Monday and he told me everything looks great. The fever should be gone in about three days and the cough will probably last a couple of weeks. I was okay with that but when Friday came around and his fever was still coming back I called to talk to the nurse. She said that the cough has been lasting up to a week and to just give him lots of fluids and Motrin to keep him comfortable. Fine I can do that. Then, Sunday Justin fell asleep around 5:30 and didn't wake up until after 8:00 the next day. That is so out of character for him. Monday he actually asked to go to bed which is the first time ever and Tuesday he fell asleep on our couch with the t.v. on and Isabelle running around screaming. He has never fallen asleep anywhere but his bed and the car before, let alone with so much noise around him. So not only is he still having this fever and cough but now he is extremely tired too. Did I mention that when he woke up he was breathing irregularly too?

I decided to take him to the urgent care that night. He has not enjoyed his last couple of trips to the doctor so of course the mention of going there freaks him out. I finally convinced him to go (or should I say bribed him with the promise of ice cream afterwards). When we got down there I was shocked by all the cars and the mention of the hour and a half wait made me turn around and head home. By this point i'm in tears but stop them long enough to make it through the Dairy Queen drive thru to get Justin his promised ice cream even though we didn't actually see the doctor.

We went home and I was trying to figure out what to do because I really wanted Justin to see a doctor that night. I finally remembered there was another urgent care by us so we loaded up and went. I showed up at 8:01 and they closed at 8. I even asked if they could let me in and they told me no. How could you turn away an extremely pregnant woman who has obviously been crying and holding a sick three year old? Needless to say, the tears came again.

I decided to head back to the original urgent care and wait it out. After about an hour we saw the doctor. Everything went fine until he said he needed to swab Justin's nose to see if it was the flu. I didn't know that he meant stick an extremely long, bendy, cotton swab as far up Justin's nose as possible. This time it was Justin's turn to cry. By the time he got in bed last night it was 10:30.

Today was a whole new day of trauma. The doctor ordered chest x-rays and blood work done. I couldn't go in for the x-rays because I am pregnant but Dave said it took four people to hold Justin still enough to take the picture and apparently Justin was throwing punches left and right and kicking wildly. So glad I missed that!

Justin went immediately from the x-rays to the blood work and of course he's not in a good mood at this point. Dave had to totally restrain him while two people worked to draw his blood as quickly as possible. They took three vials! Since Justin couldn't physically do anything while they were doing it he chose to yell at them instead. At the end I said, "He really is normally a sweet boy!" At least it's all over!

The preliminary x-rays look like he's developing pnuemonia so he's now on an antibiotic which will hopefully clear it up quickly. By the way, this afternoon after all of these traumatic things Justin broke out in hives from head to toe. Now I have to figure out what's causing those too. Could anything else happen at this point? I won't even start with what's wrong with Isabelle! I just keep praying I won't go into labor. . .