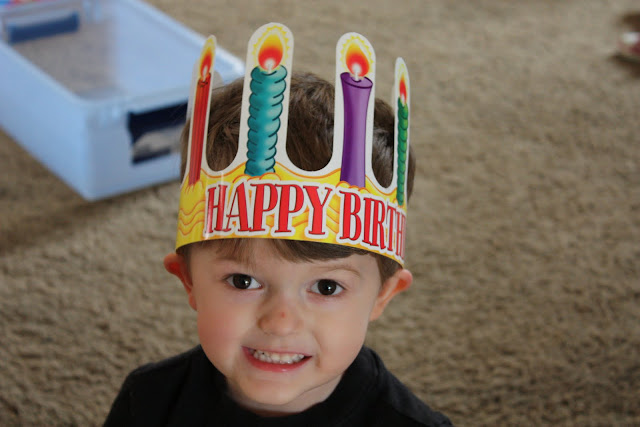 Justin got this crown at preschool.  We brought Krispy Kremes donuts so that he could celebrate with all his school friends. 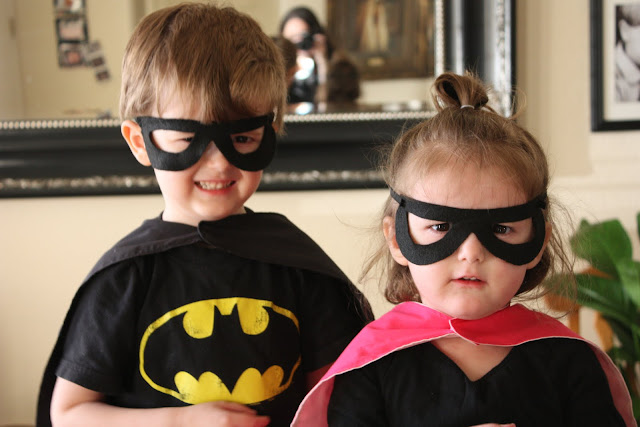 We had a Batman party and Justin of course dressed up as Batman and Isabelle was Supergirl.  I got these reversible capes off of Etsy and they are so cute! 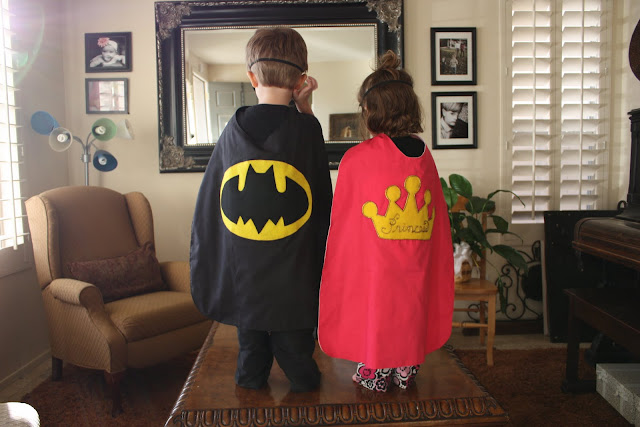 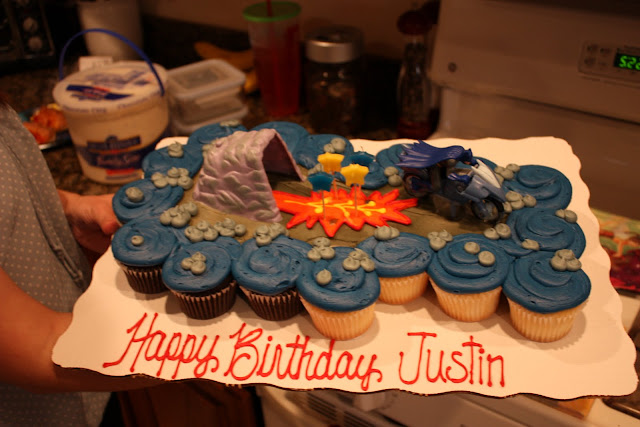 I love cupcake cakes!  They make serving everyone so easy! 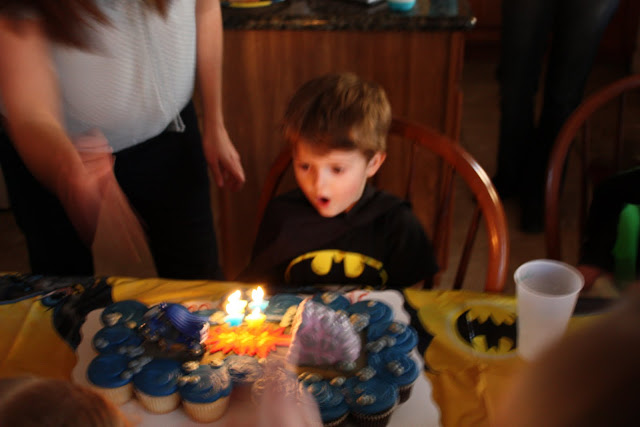 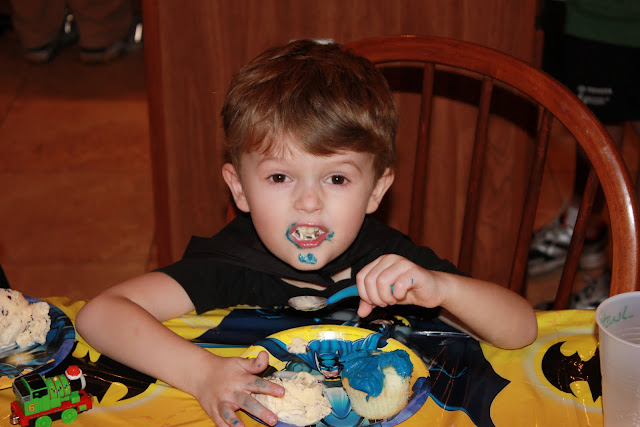 Justin loves the cake too! 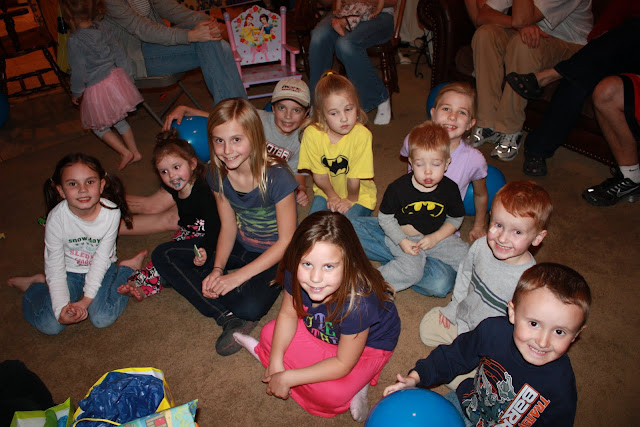 All of the cousins and siblings.
Most of them were dressed up as superheroes earlier but I wasn't fast enough in getting a picture.
Do you think Isabelle enjoyed her cupcake!? 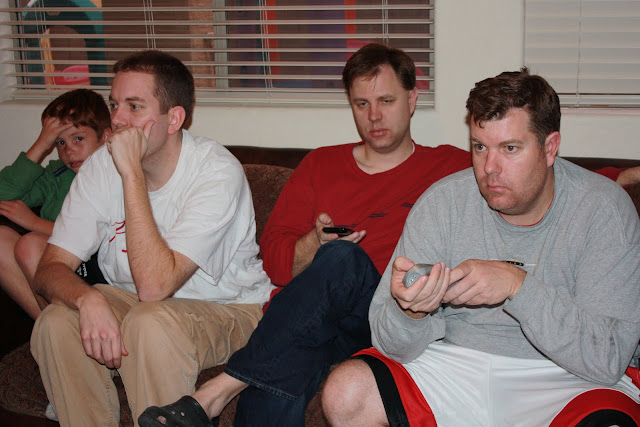 My Brothers
Next time I'll tell them i'm taking a picture of them so they can be ready! :) 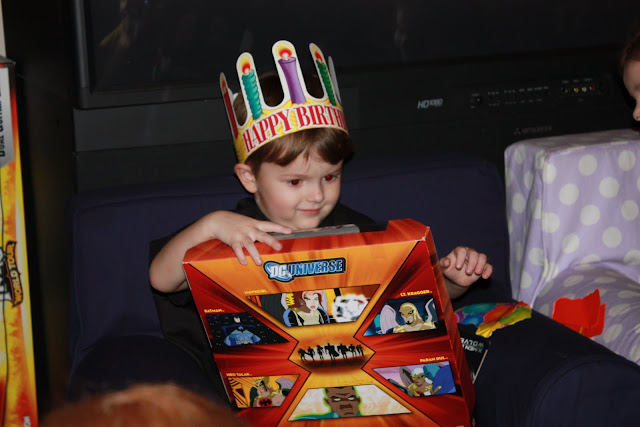 Justin had so much fun opening and playing with his presents.  That night when I was tucking him in bed I asked him what his favorite one was.  He said, "All of them!" 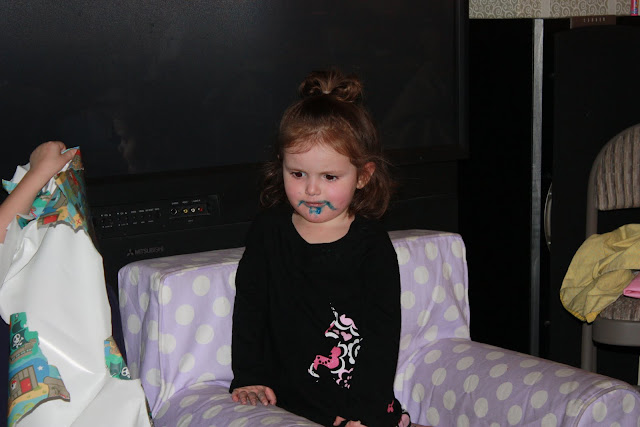 Poor Isabelle!  She just didn't get that only Justin was getting presents.  This is the sad look she had after I told her AGAIN that none of the presents were for her.  I even gave her the cape early in the day so that she wouldn't be so sad but I guess it didn't work!
Justin is such a sweet boy!  I love watching him with his sisters and how sweet he can be with them, at least most of the time!  He is a great helper and is very smart.  He is even starting to read!  He loves to wrestle with his dad, he is a pro at video games (I know, not the best thing for him but it's the only thing that makes him sit still for a little while!), he loves superheroes, riding his bike, playing sports, and doing anything that makes him a "big boy."
He was like an old pro at the doctor for his check up.  He was so proud to show the doctor how big he is getting.  We're hoping for a growth spurt though. He was almost 39 inches tall which is only the 20% and weighed 33 lbs which is the 25%!
I can't wait to see what the future holds for Justin!
We love you Justin!

Most people when they hear the name of the neighborhood we live in automatically think it is a nice neighborhood. When we first lived here there were many great families from our ward that lived in here too. The Merrills, the Taylors, the Stogdills and the Wisers just to name a few. Sadly they have all moved on and now we are pretty much the only family from the ward in this neighborhood. When we moved to Annecy from here we were leaving because we had definitely outgrown this house. Isabelle was a month old when we moved. Now we have one more child (Ruby) then last time and we are bursting at the seams! Ruby sleeps in the loft, which is surrounded by everyone else's rooms, so if she cries in the middle of the night I can't really let her cry it out because I don't want the other kids to be woken up too. So I have been very sleep deprived because of this! Also, when we moved back we lost 1600 square feet of living space. It's all now packed into our garage and a storage room that we are renting. I could probably deal with all of these problems but the one thing that I can't handle is that I don't feel safe in this neighborhood! The Mesa police have been putting bait cars in here to try to scare away car thieves and they tried to get a neighborhood watch program going but there wasn't enough interest. Plus we have had a few strange, weird, or scary things happen to us since we moved back. First of all, I can't believe some of the people that live in here now. I'm not trying to judge but some of them are definitely not people I would ever want to be friends with. I think when the housing bubble burst it must have allowed more of a variety to buy in here because they definitely wouldn't have been able to afford it before. I could deal with this too but I can't deal with these next few things. One day when Dave and I came home from church we found the back door wide open. When Dave went to look out back there was a black crate (not ours) pushed against the wall like someone had used it to jump over the wall. Luckily, nothing was missing, perhaps we interrupted something?! Another time when I came home with the kids the back door was wide open again and I swear that I heard somebody upstairs and then I could hear someone running in the rocks, like they must have jumped from the second story down. One time we found an old frying pan in our backyard that got there who knows how? But finally today something else happened. When I was coming back from QT a neighbor two doors down who looks like he is part of a Mexican gang was standing in our front yard. I only know who he is because many times when I come home he is standing outside with his girlfriend making out and they don't bother to stop. Anyways, he was in my yard holding a semi-large rock and then when he saw me he dropped it and started walking away. He didn't bother to acknowledge me at all. You know a nice, "Hi i'm standing in your yard for some strange reason" smile or nod would have made me feel a little better but no, nothing. So I roll down my window and say very nicely, "Are you looking for something?" and he very nicely without stopping says, "No, I just dropped something" and keeps on going. Excuse me! You're looking for something in my front yard with a rock in your hand! We don't even live next door and you don't take walks to give you the opportunity to drop something, all you do is make out. And if you are REALLY looking for something in my front yard, why don't you ask me if I've seen it. Needless to say I didn't believe him but i'm still not quite sure what he was doing. All I know is I need out of this neighborhood! I personally think feeling safe is a necessity in life! Unfortunately we aren't able to buy a house at this time and renting a house when you already own one doesn't quite seem right but that's what i'm leaning towards. In the meantime I think I am going to become G.I. Jane and learn to protect myself, especially with how much Dave is out of town and it's just me and the kids. So next time you see me, I might be packin' some heat! 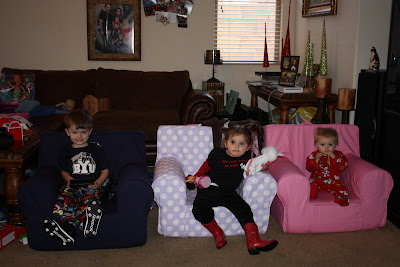 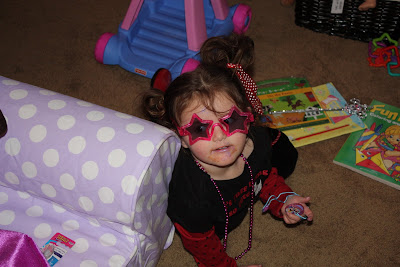 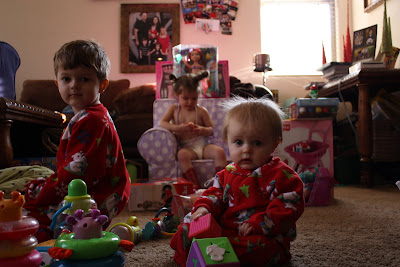 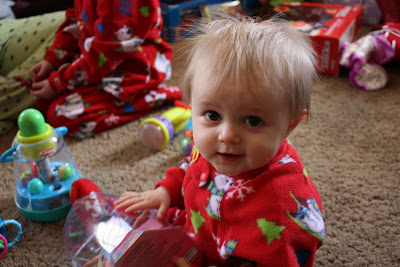 What more could you ask for, matching jammies, matching chairs, red cowgirl boots and wolverine claws, they had a great Christmas and so did I. Thanks Dave for being so thoughtful! I love you!

This Christmas season I was determined not to be stressed and surprisingly, it worked! I love December and all the fun things that go along with it. I think the best part is watching my kids have so much fun and be excited for Christmas and Santa! We were able to do a lot of fun things this year too. If you want to try not to be stressed next year, I recommend doing all your shopping on Amazon. You can't beat great prices and free shipping! It definitely made things a lot easier for me this year! 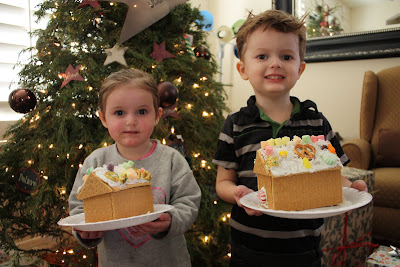 We had a blast making "gingerbread houses" at my friends house! Isabelle definitely ate her share of candy that day! 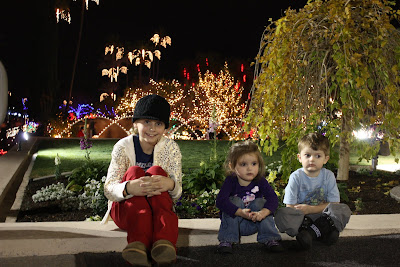 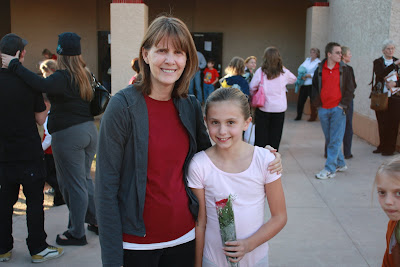 Robyn was in The Nutcracker this year as a soldier. She did a great job and we had a lot of fun watching her! 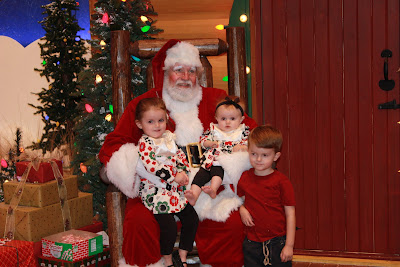 This year was Justin's first year doing soccer and he had a blast! His coaches were amazing and the whole team improved so much over the season. Justin had a lot of fun except for the first game which he ended up not even playing in once he learned he couldn't use his ball. He started crying and refused to play so we left early. I guess I should have warned him that there would be a game ball and that he couldn't use his like in practice! He was fine every game after that and averaged one goal per game. He was very proud of himself after a game when he scored three goals. I think one of Justin's favorite parts was getting the ball out of the goal and giving it to the referree. If anyone else tried to get it he would wrestle them for it and usually win. He is a very silly boy! 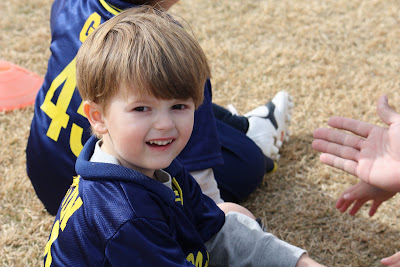 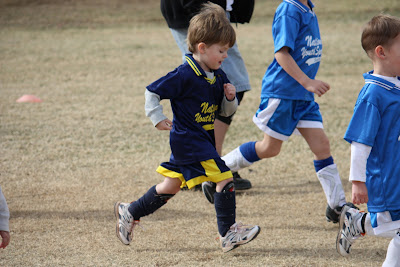 Look at that hustle! Justin has a funny way of running, he pumps his left arm as hard as he can and doesn't really do much with his right arm. I really need to get it on video! 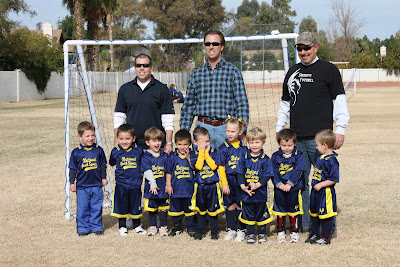 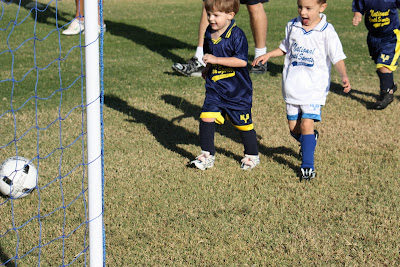 This was when Justin scored his first goal!