For Dave's birthday I planned a day trip to Kartchner Caverns. He has always wanted to go there so I thought that it would be a nice getaway. Tombstone happens to only be about a half hour away from there and Dave loves Tombstone so we ended up going to eat there afterwards. The cave was really cool. There were lots of neat formations to look at and the story behind the discovery was really neat too. Unfortunately, they don't allow pictures to be taken in the cave but you can check out the website for some really cool pictures. I would definately recommend going to the cave but make sure you go in the winter time when both parts of the cave are open. Tombstone seemed very "dirty" to me and I don't mean because there was dirt everywhere! I guess I will have to watch the movie sometime and then maybe I will appreciate it. I think Dave loved it though and that's all that really matters! Happy Birthday Dave! I love you so much and you are such an incredible dad and husband. 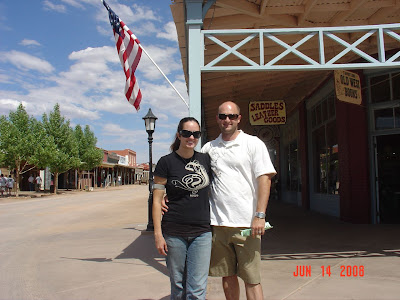 This is us at Tombstone 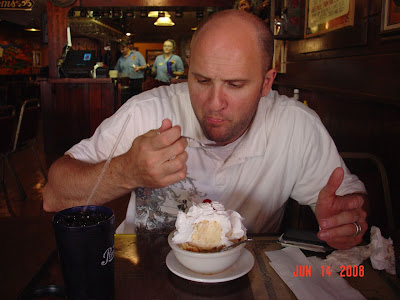 This was the best part of Tombstone for me- deep dish apple cobbler! Yum!

Justin started swim lessons two weeks ago and loves it! He takes them with his cousin David and I love watching them learn together. They have so much fun jumping off the diving board, doing "monkey walks" and singing songs in the pool. He didn't like putting his face under water at first but now he doesn't mind and he loves everything else. He looks forward to going every day and it has been nice to have an outdoor activity for him to do even though Isabelle and I melt! Unfortunately, I haven't been able to get very good pictures because I dropped our camera in the sand at Rocky Point and now it won't zoom but here are some anyways! 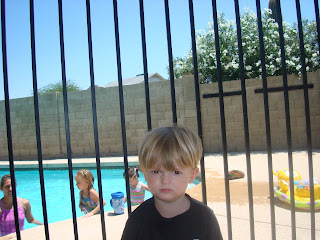 Doesn't he look excited! He really was but I guess just not to take a picture. 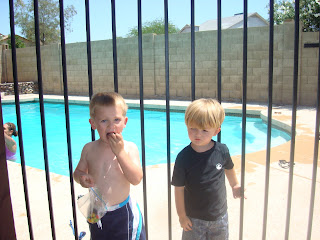 Justin and his cousin David
Robyn is excited that it's summer or more importantly, that school is over. It is hard to believe that she is going to be in fourth grade next year! 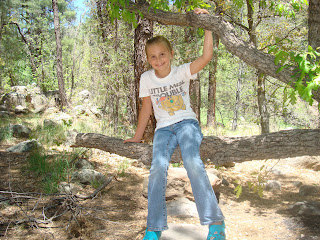 Robyn up in Payson

Isabelle had her 9 month check up this week and she apparently isn't as chubby as we all think she is! She was only 50% for both height and weight which is down from her last check up where she was 70% for both. She does still have quite a large head though at 77%! The doctor said everything else looks great and she is right on track developmentally. She is pulling herself up on everything and is getting very good at cruising. She even took two steps the other day when Dave stood her up and let go! She is growing up so fast. I won't post any pictures of her since I haven't taken any new ones since the last post.

As for me I am proud to announce that I have officially hit my goal weight! I have been on a 1450 calorie diet for the past two months, working out with a trainer and wearing the bodybugg. If you don't know what it is check out the website. I have lost 12 pounds and now that I'm at my goal I hope to keep going. I never thought that I would have to go on a diet since I was always skinny growing up but I am not one of those lucky people where the babyweight just melts away. Whoever said that nursing will make the weight disappear was a liar! It's been a lot of hard work but well worth it. I am not trying to brag but I decided I should post this so that when I am in the same situation after the next baby I can look back and remember that I lost the weight once and I can lose it again! Also, I woke up with two very swollen, red and itchy ears today! Definately not attractive! I think it is cellulitis (not to be confused with cellulite) which my college friends might remember that I had freshman year, but the doctor wasn't convinced and just sent me home with no help or medicine at all. I hope this goes away fast. . .

As for Dave, he was able to go on a three day campout with the YM a couple weeks ago and had a blast. Dave loves camping but unfortunately we have never been able to go as a family since camping with babies is not very fun! He was grateful for the opportunity. He has also been working out hard and is looking great! His birthday is this Saturday too! I have a fun day trip planned so more pictures will follow.

A big thanks to my parents for coming down this weekend to help with the kids and the house. We got a lot of the finishing touches done and hopefully the landscapers will finish soon so I can post pictures finally!