I'm not really a big fan of the snow after living in Utah for 5 years but I really wanted to take the kids to play in the snow. We finally got the opportunity to go on President's Day and the kids had a blast. We went up to Christopher Creek which is right outside of Payson. Dave's family used to own a cabin there so he wanted to check it out and then we just played in the church parking lot right by it. There was still a lot of snow even though it hadn't snowed recently but it was a little hard. I think the kids favorite thing was eating the snow. Once Isabelle realized she could eat it she just walked around with a snowball in her hand and didn't bother playing with it anymore, just eating it. Justin the next day at school told his teacher all about our trip and how yummy the snow was! 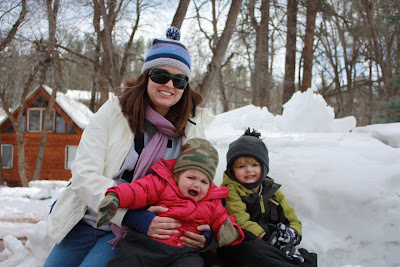 Isabelle did not want to hold still for the picture! 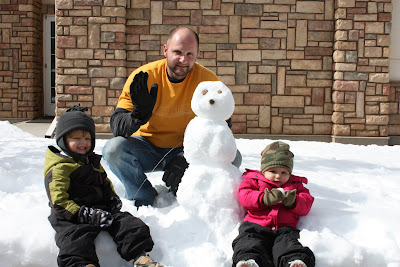 Dave helped the kids build a snowman. Notice the snowball in Isabelle's hand! 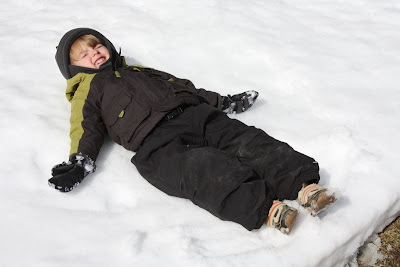 Justin was excited to finally make a snow angel instead of a carpet angel like he does at home. 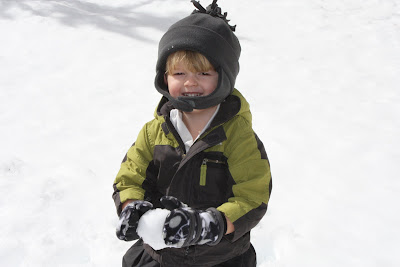 Justin and Dave had some good snowball fights! 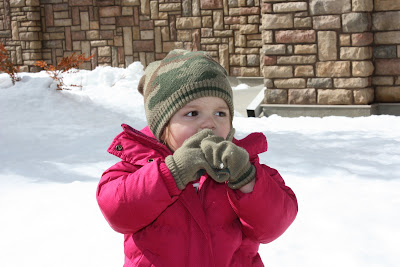 I know some people are very anti-Valentine's Day but I like it. This year Dave and I celebrated the night before and it was a special treat for me. I have been begging for a night away because other then when I was in the hospital with Isabelle I have not had an overnight "break" from the kids. Dave's mom was kind enough to come stay with the kids so that we could get away for the night. Dave surprised me by taking me to The Buttes resort overnight. We ate dinner at one of their restaurants and I had the best creme brulee I have ever had! They mixed berries into the cream instead of just putting it on top. I was looking forward to a good night's sleep since there were no kids to wake me up but unfortunately it was NBA all star weekend in Phoenix and I think there must have been a lot of young people staying there too and they were so loud! All night long people were walking by our room talking loudly and laughing, probably coming to and from the bars. Oh well! In the morning Dave had another wonderful surprise for me. He had scheduled a facial for me at the spa and while I was there he was going to go back with the kids and just let me spend some much needed alone time until check out. It was wonderful! I read my book, watched tv, and just relaxed. The facial was awesome too! I'm so lucky to have Dave! Valentine's Day is also special to us because it is the anniversary of our engagement to. It's fun to celebrate both! 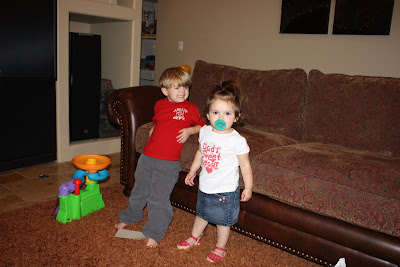 Here are the kids in their Valentine's outfits. It's not a very good picture though because the kids looked so cute!

A few weeks ago we went to a train park in Scottsdale. It was so much fun! It had two little trains that you can ride on, a carousel, a train museum, a great playground, and a few other things too. 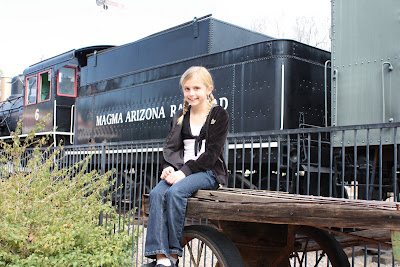 This is Robyn in front of the train museum. It's inside a train that used to be used by one of the President's but I never found out which one. I think I need to go back! 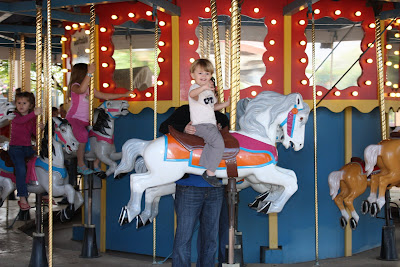 Justin had a lot of fun on the carousel but it was stressful for me. It didn't have any seatbelts so I had to hold on to him the whole time so he wouldn't fall off. I found out later that it is an old carousel on the carousel preservation list and that's why they haven't "upgraded" it. 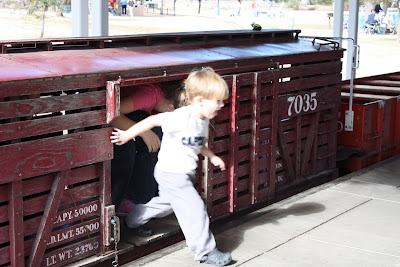 This was Justin and Robyn's favorite part. At the end of one of the trains they have this little cattle car that the kids can ride in and they shut the door so they're kind of trapped. Justin loved It! 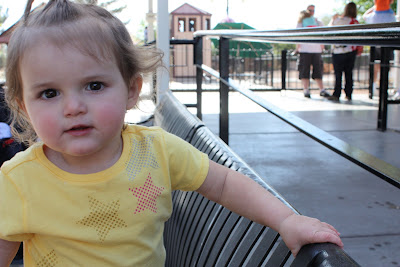 Dave took Isabelle on one of the train rides and she screamed the whole time! I guess she didn't like it but she loved the playground and playing in the sand.

Someone please take them! 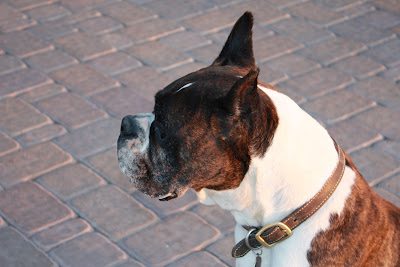 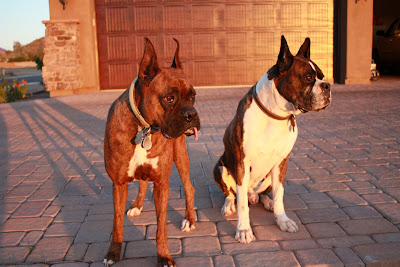 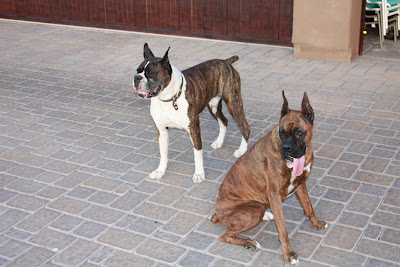 Justin's Party and 3 Year Check up

Justin had a great "Diego" party. We were blessed with beautiful weather that day so we had it at the park in our neighborhood. Justin was so excited to have a birthday party and to have all of his cousins over to play. For food we enjoyed beetle wings (potato chips), snake eggs (grapes), crocodile teeth (wedges of apple), and ants (craisins), and drank jungle juice. 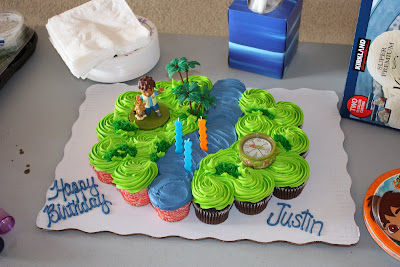 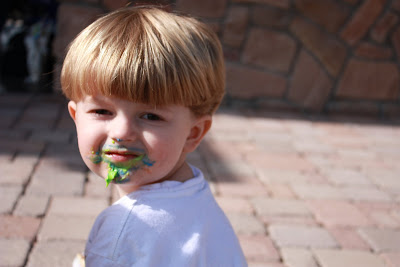 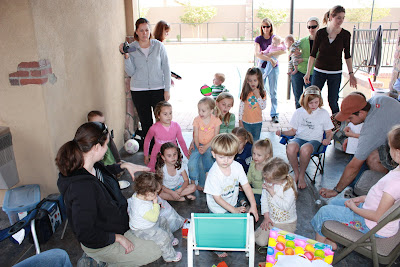 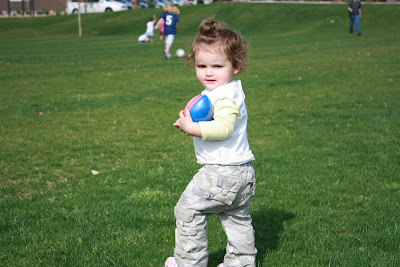 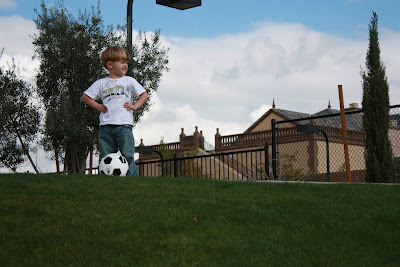 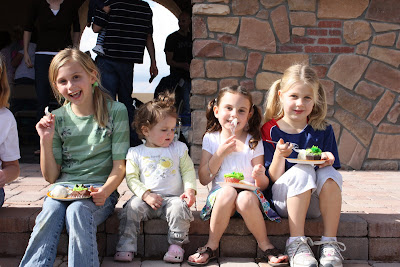 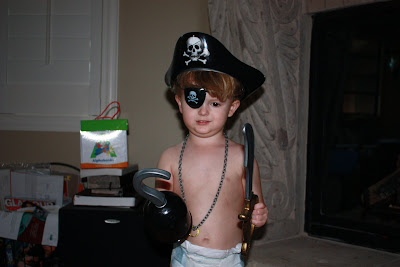 The Pirate
Justin's cousins Sydney and Sophie gave him a pirate costume and he loves dressing up in it and running around the house saying "Arrghhh" and "Mateys".


At Justin's three year check up he was not very happy. The first thing he had to do was stand on the scale and get measured for height. What a chore it was to get him to do that! He was pretty good with the doctor examination until it came time to look in his mouth, good thing that was the last thing! He has always been tall and skinny according to the growth charts so I was shocked to find out that now he is short (20%) and skinny (25%)! I'm hoping for a big growth spurt soon. At least I know why he can't ever reach the wheels of a tricycle and a bicycle, it's not because the pedals are too far like I thought, it's because his legs are too short!
Justin has become very independent lately. It started when he finally learned how to open the door by himself. That resulted in a very scary incident when he went outside by himself while I was in the shower and he was "taking" a nap. Luckily, Robyn was walking home from her friends house at that exact time and happened upon Justin walking down the street away from our house. I now lock the door at all times! Could you imagine if Robyn hadn't been there! He also wants to buckle himself in the car seat by himself, and pretty much anything else that he can do he wants to do by himself. It is fun to watch him learn to do things but it has definitely tried my patience at times!
He is halfway potty trained. He will use the toilet if he isn't wearing a diaper but still prefers to wear them so I don't really know what to do. Everyone says don't force it, he will do it when he's ready but I really don't want to have three kids in diapers so that leaves me two months to fix this problem, any advice?
Justin is also very smart and loves going to preschool. He knows all of his letter sounds and can also identify all the letters. The other day after school Justin's teacher, Miss Kerry, showed me that he can sound out letters together to make a word, so he pretty much is reading! Of course Justin doesn't know he is reading he just thinks he is making the sounds. I was watching the pregame for the Super Bowl the other day and the interview with Barack Obama came on. Out of nowhere Justin says, "That's Barack Obama." Shocked that he knew this I said "What?!" and he repeated it again. I didn't teach him that and neither did Dave so we're still trying to figure out how he learned this.
He is so fun to have around and I love listening to his sweet little voice. I wish that I could capture it forever. Sometimes I wish that I just had a camera that would follow him around all day capturing every moment! I try to treasure these times because I know they will be gone too soon!