We've been kind of busy lately but there have been a few things that I wanted to post so I will just do them in one big post. 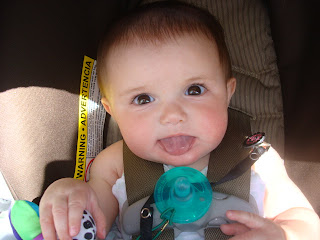 This is just a cute picture of Isabelle. She loves to stick out her tongue and does it constantly. 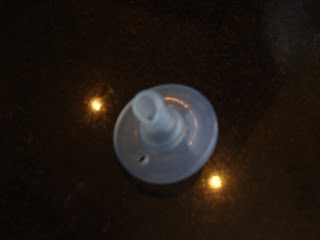 This is a bad picture of Justin's pacifier, or pacifas as he calls it. We've been wanting to take it away from him since he was 18 months old but I told Dave he had to do it because it made me sad to think of taking something away from Justin that he loved so much. I know, I'm lame. Well last week Dave finally did it. He cut the top of the pacifier off so when Justin tried to suck on it it didn't quite give the same effect. Justin said it was broken. Of course he was upset but luckily it only took 2 nights and one nap time of screaming for a while to get him used to not having it. Of course now he wakes up at 6 in the morning sometimes and with nothing to suck on he is ready to get up for the day. Is it too late to give the pacifier back?! 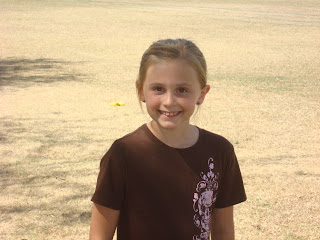 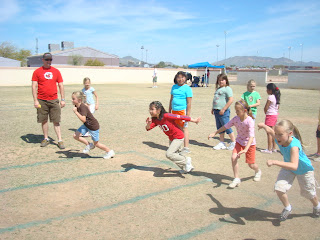 Last week Dave volunteered to help out at Robyn's track and field day. That's him in the red shirt. He was such a proud Daddy. Robyn is quite the athlete and took home the blue ribbon in every competition that she was in, the 100 yard dash, hurdles, long jump and softball throw just to name a few. Robyn was so proud of herself and wouldn't let me hold her ribbons for her because she wanted everyone to see that she had all these blue ribbons. Great job Robyn! 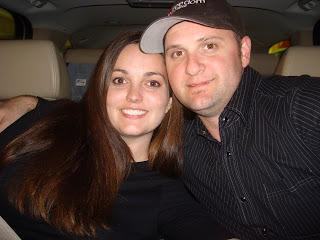 Dave and I did make it to the Melting Pot last Friday. It was sooooo good. I can't remember the name of anything we got except for the dessert, dark chocolate raspberry. Mmmmm! I especially loved the Rice Krispies dipped in chocolate. It was also just nice to get out without any kids because that has rarily happened since Isabelle came along. Thanks Grandma and Grandpa Bradshaw for babysitting!

Congrats on 4 years. Glad you had a great celebration. Nice to be able to see what you are up to. Plus, you have darling kids.

Those are super cute pictures! That is pretty cool that Robyn is so fast and athletic! How fun.

We had to do the same thing with the passi for all of our kids, it's sad but saves their teeth from needing extra orthodontic work! And, Robyn is so awesome at track & field day. I love watching kids compete & take it so seriously!

Jillyn This is Stephanie (Dave's cousin). Anyway it was good to see you guys today at the park, I hope we can keep in touch more! Cute post and thanks for letting me hold Isabelle